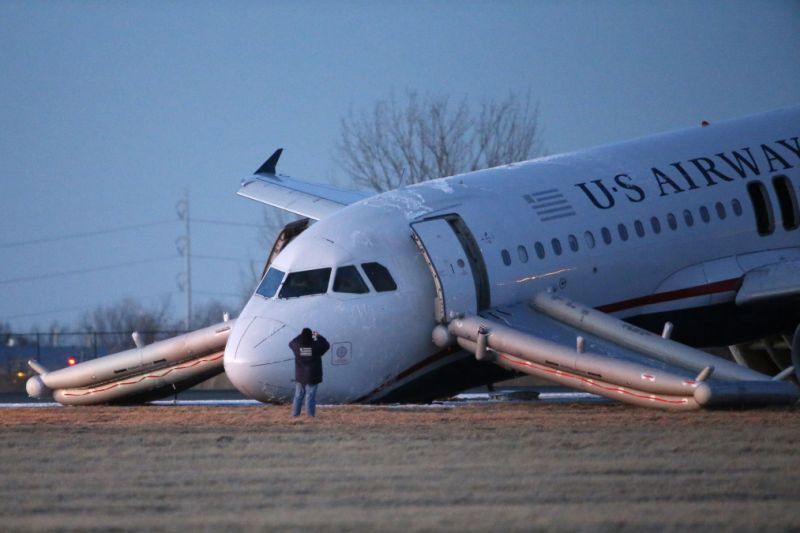 New reports say pilot error was the cause of a botched US Airways takeoff in Philadelphia that resulted in a crash landing in 2014. Federal investigators with the National Transportation Safety Board revealed the information in its final investigative report released on February 25.

“PHILADELPHIA (AP) — Federal investigators say pilot error was the “probable cause” of an aborted takeoff that collapsed a jet’s nose gear in Philadelphia. The National Transportation Safety Board says US Airways Flight 1702’s pilot and co-pilot chose to take off rather than ensure its computer was properly configured. The NTSB’s final report was released Thursday. It says the first officer entered information for the wrong runway before the March 2014 flight took off.”

The flight was leaving from Philadelphia International Airport on March 13, 2014 and headed to Fort Lauderdale when the incident occurred. The plane bounced into the air after slamming onto the runway during takeoff, subsequently traversing 2,000 feet into a field.

Although initial reports suggested a blown tire or landing gear may have contributed to the crash, the NTSB’s most recent findings say the pilots failed to follow proper procedures, causing the accident.

“The agency pointed to not following procedures and the “captain’s decision to reject the takeoff” after the plane had reached a speed in which it was no longer safe to do so as probable causes. The agency said that the pilots did not input a piece of information into the flight computer correctly. According to the report, the pilot told the first officer that they’d get the data issue “straight when we get airborne.”

The report also says that, “inaccurate data then triggered a series of audio alerts, according to the NTSB. As a result, when the jet started to take off, alerts sounded in the cockpit.”

An NTSB specialist said in the factual report that the plane was “in air” for 4 seconds. The decision by the captain to abort takeoff while the plane was in the air already primarily caused the incident.

According to New York aviation lawyer Jonathan C. Reiter, who is litigating a serious injury case arising from this crash on behalf of an injured passenger, pilot error is one of the top reported causes of plane crashes. The New York lawyer says on his website of the issue of a number of aviation accidents having been linked to pilot error over time, “Pilots assume responsibility for the safety of passengers each time they put themselves in command of an aircraft. Unfortunately, not all pilots act in accordance with outlined safety standards and guidelines, and negligently put their own lives in addition to the lives of others at risk by making poor decisions prior to or while they are operating a plane.”

The attorney further says, “Acts of pilot negligence include operating an aircraft while intoxicated or under the influence of drugs, a failure to communicate properly with air traffic control, a failure to exercise due diligence in inclement weather conditions, failure to maintain situational awareness and other types of negligence.” Individuals who have been injured in an aviation incident or lost a loved one in a plane crash that may have been caused by pilot error, can assess their legal options with a qualified attorney.

An American Airlines spokesperson said that neither pilot involved in the aforementioned incident had flown since, and the plane was no longer in service.