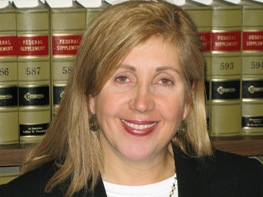 Ms. Stone was employed by Judge Victor Rey of the Court of International Trade as a Law Assistant.