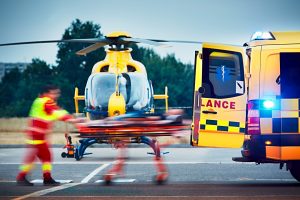 Helicopters are a common sight in cities like New York City, where tourism companies operate them as a way to show visitors the city skyline and surrounding area. Most helicopters are safe, but these aircraft are not without risks. While commercial airlines are the safest way to travel compared to all other forms of transportation, helicopters do not share this distinction. Unlike commercial jetliners, helicopters pose a variety of safety hazards.

According to statistics from the National Transportation Safety Board (NTSB), the rate for helicopter crashes is an average 7.28 accidents per every 100,000 hours of flight time. This means that helicopters crash 35 percent more often than other aircraft.

Helicopter crashes are typically complicated cases that can involve multiple responsible parties. This is why it’s important for individuals injured in a helicopter crash to work with an experienced New York aviation accident lawyer.

There are many reasons why helicopters have higher crash rates. Compared to commercial flights, which have the highest safety record of any type of transportation, helicopters are much more dangerous.

Tragically, many helicopter crashes result in the deaths of the people on board. In these cases, the family members of the deceased may be able to file a wrongful death lawsuit against the parties responsible for the crash.