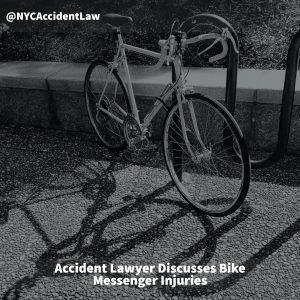 According to the New York Times, there are something like 5,000 bicycle messengers in New York City — more than any other city in the world. These intrepid bicyclists deliver food, documents, groceries, and all manner of items — all while navigating thick traffic in one of the world’s largest cities. “Occupational hazards include barreling trucks, barely visible potholes and taxi doors flinging open without warning.”

If it sounds like a dangerous occupation, it is. If you’ve been injured as a bicycle messenger in New York City, you need the help and skill of an experienced bicycle accident lawyer. Here are a couple things to know.

Bicycle Messenger Accident? You Might Not Be Eligible for Workers’ Compensation

This makes it extremely important for bicycle messengers to work with an experienced New York City bicycle accident lawyer. Just because you can’t qualify for workers’ comp payments doesn’t mean you can’t pursue a personal injury claim. And when an accident causes injuries that impact your ability to earn a living, it’s important to get compensation for your physical injuries, mental anguish, pain and suffering, lost wages, and any other damages. This is where a knowledgeable bicycle accident lawyer can help.

Not only are bicycle accidents on the rise in the United States, these injuries are generally quite costly. According to one study published in the journal Injury Prevention, the cost of treating bicycle injuries has risen steadily over the past two decades.

If you’ve been involved in a bicycle accident as a bike messenger, your injuries may be more severe and long-lasting than you realize. Don’t miss your opportunity to get the compensation you need to cover the cost of your medical treatment.

New York City bicycle accident lawyer Jonathan C. Reiter states, “Unfortunately, many motorists, and even some pedestrians, view bike messengers as a nuisance. Some motorists in the city feel like they shouldn’t have to share the road with bike messengers. This attitude leads to people getting seriously hurt and sometimes killed.”

If you’ve been injured in a bicycle crash as a bike messenger or just a regular cyclist, get in touch with an experienced New York City bicycle accident lawyer today. A knowledgeable bicycle accident attorney will explain your rights and help you explore the options in your case.