The tragic story has drawn attention to a relatively common tourist attraction on St. Maarten 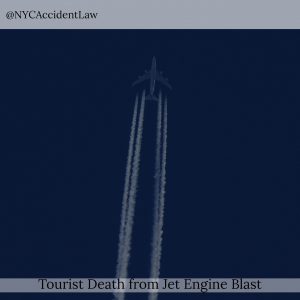 When you’re on vacation, the last thing you should have to worry about is being involved in a life-or-death situation. Yet for one woman visiting the Caribbean, an island getaway turned tragic.

News reports state that the woman was a 57-year-old mother visiting St. Maarten from New Zealand when she was killed at Princess Juliana International Airport. According to media reports, the mother of three was standing behind a fence separating the airport’s runway from the beach when a jet’s engine blasted her from her feet and sent her flying into nearby rocks. She struck the rocks and was knocked unconscious. She later died from her injuries.

The tragic story has drawn attention to a relatively common tourist attraction on St. Maarten. According to media reports, tourists from around the world flock to the beach adjacent to the airport to watch jets fly in and take off. Videos available online show just how close massive airliners get to the beach as they approach the runway, and dozens of YouTube videos show tourists in bathing suits clinging to the airport’s chain length fence as jets prepare to take off. Tourists can stand just yards away from aircraft — and some can be seen tumbling away from the fence and into the sand.

Spokespersons from the St. Maarten police department told reporters that there have been minor injuries in the past due to the tourist attraction, but that no one has ever been killed. The incident has caused many to question whether the airport bears any responsibility for permitting people to get so close to the runway and the planes. One video posted by the Washington Post shows a young girl being blasted forcefully away from the fence near the runway and catapulted into a concrete barrier beside the beach. The force of the jet’s engine is so powerful she is lifted off the ground and slammed headfirst into the concrete.

The fence separating the beach from the airport has barbed wire along the top, and the fence itself contains several signs that explicitly state that jet blasts can cause severe physical harm and/or death. Media reports also state that police officers from the island regularly patrol the fence during busy hours.

New York aviation accident lawyer Jonathan C. Reiter states, “Airline accidents don’t always occur in the air. In some cases, people get hurt because airports are careless. Although it’s unclear what, if any, responsibility the airport on St. Maarten’s has regarding the woman’s death, it’s tragic that a death had to occur before someone hopefully takes steps to make sure such a terrible accident doesn’t happen again.”

If you’ve been injured in any kind of aviation-related accident, contact an experienced aviation accident lawyer as soon as possible to discuss your case.