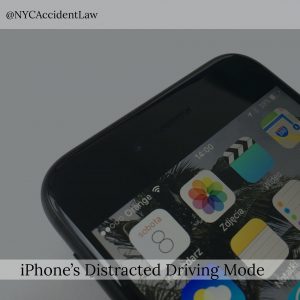 According to the National Highway Safety Traffic Administration (NHTSA), distracted driving injured 391,000 people and killed 3,500 in 2015 alone. Distracted driving has become a serious epidemic on the roads — and it’s mostly due to the rise in smartphone ownership.

Overall smartphone ownership has reached 77 percent in the U.S., and about 92 percent of drivers between the ages of 18 and 29 report owning one.

Smartphones may be convenient, but they can be a serious source of distraction behind the wheel. Texts, emails, and notifications can be too tempting for a motorist to ignore. It takes just a few seconds to glance down and read a text or email. Unfortunately, that’s all it takes for someone to cause a fatal or catastrophic crash.

Many safety advocates have pointed out that smartphone manufacturers have the ability to force drivers to put their phones down and pay attention to the road. Now, Apple has done just that.

In June 2017, Apple unveiled a host of new features that will be released with its latest operating system, iOS11. Among these features is a mode called Do Not Disturb While Driving (DNDWD).

When turned on, the feature will shut down a motorist’s phone. As Time points out, however, “…the feature isn’t perfect. An override switch meant to be used by passengers could just as easily be used by a motorist determined to text and drive. Humans are imperfect, after all, and will never stop making dangerous choices.”

In January 2017, Apple was named in a class action lawsuit alleging it has the ability to install a lockout feature on its phones but failed to do so. The lawsuit claims that the technology giant should be held accountable for distracted driving accidents caused by smartphone use. Similar lawsuits have been filed over Apple’s FaceTime app, which allows users to chat face to face through streaming video.

New York City auto accident lawyer Jonathan C. Reiter states, “The CDC has released statistics showing that eight people are killed every day due to distracted driving. Many auto safety experts argue that the number is much higher. Any time you get behind the wheel, it’s important to put your phone down.”

If you’ve been injured by a distracted driver, speak to an experienced New York City auto accident lawyer about your case today.