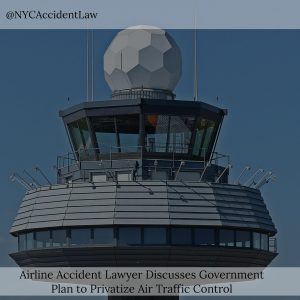 Should the country’s air traffic control towers be controlled by the private sector? That’s the question buzzing around Washington lately, after the current administration introduced plans to convert the nation’s government-run air traffic control system to a private system.

In essence, the plan would cease FAA oversight over the tracking and guiding of airplanes and put it in the hands of a private, nonprofit corporation created specifically to manage the nation’s air travel.

For the flying public, the issue isn’t so much one of politics as it is one of safety. Simply put: Will this plan make the skies safer, or does it have the potential to lead to disaster?

Aviation safety experts spoke to the Washington Post about the potential pros and cons of a privately-run air traffic control system.

The U.S. has the largest and most complex air traffic control system on the planet. It also has the best safety record for commercial air travel.

According to media reports, the transfer would involve shifting responsibility for about 300 airport towers, 35,000 workers, 14,000 controllers, and 6,000 technicians to a private company.

Critics of the proposal say it opens the door for the big airlines to have an unfair seat at the board table, which could drive up fees and lower the quality of service for passengers. They also worry that a private corporation might place profits above safety.

However, supporters say that the FAA would still maintain safety oversight even if the system switched to private control. They also argue that the FAA’s procurement process is bogged down by government red tape that makes the acquisition of new planes and technology exceedingly slow.

As a cautionary tale, some have pointed to the privatization of ambulance and EMS services. In recent years, many communities have attempted to cut costs by switching from municipal EMS services staffed by government employees to private ambulances and first responders. The results haven’t always been good, and in some cases they’ve been fatal.

NYC Airline Accident Lawyer on the Importance of Airline Safety

Airline lawyer Jonathan C. Reiter states, “Politics should never come before airline passenger safety. It remains to be seen whether Congress will approve an air traffic control privatization bill. Similar legislation has been introduced several times in past decades to no avail. Whatever happens, the safety of passengers must be the first priority.”