Safety experts say there are several possible explanations for the surge in auto accident deaths. 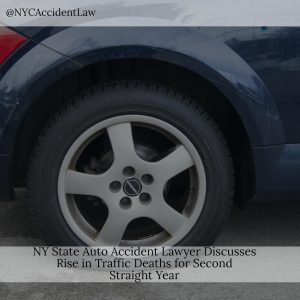 For the second year in a row, traffic deaths in the United States have increased. The New York Times reports that recently released data from the National Safety Council (NSC) shows that an estimated 40,200 people died in motor vehicle accidents in the U.S. in 2016 — a six percent increase from 2015. In 2015, motor vehicle deaths were up seven percent from the previous year. Combined, this is nearly a 14 percent jump in traffic fatalities in just a two-year period.

The report goes on to state that if the fatalities are confirmed, 2017 will mark the first time since 2007 that over 40,000 people have died in auto accidents in the U.S. in a single year. The motor vehicle deaths over the past two years also represent the largest increase in over 50 years.

Why Are Motor Vehicle Accident Fatalities on the Rise?

For half a century, auto accident deaths were on the decline. Improved safety features such as seat belts and airbags made cars safer than ever before. Automatic braking systems and collision warning features helped drivers avoid accidents before they even occurred.

So why the sudden reversal? Safety experts say there are several possible explanations for the surge in auto accident deaths.

First, the economy has rebounded since the financial and housing collapses of 2008. With more people getting back to work, there are more commuters on the roads. Gas prices have also stayed low, which makes it easier for people to drive rather than carpool or use mass transportation.

Safety experts also say that “a patchwork of state laws leaves many areas where drivers can choose not to buckle up.” The lack of uniformity in enforcing seat belt laws could be responsible in part for an increase in car accident deaths. According to the report, just 18 states require seat belts for both front and rear passengers. Furthermore, in 15 states, not wearing a seat belt is a secondary offense, which means police officers can’t issue a ticket for it unless the driver has committed another violation, such as speeding.

Distracted driving has also been blamed for the uptick in auto accident fatalities. Pew Research Center says that 77 percent of Americans now own a smartphone, up from 35 percent in 2011. The NSC has called for a ban on the use of smartphones behind the wheel. The proposed ban would prohibit hands-free devices in addition to handheld phones.

If you have been injured in a motor vehicle accident, it’s important to protect your rights by speaking to an experienced New York auto accident lawyer as soon as possible.