The FAA has announced it will not adopt any new regulatory measure for the hot air balloon industry—at least not right now. 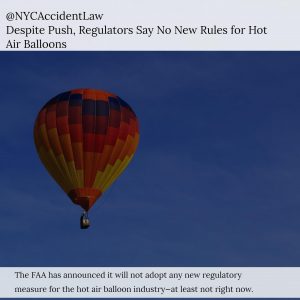 The Federal Aviation Administration (FAA) has said it will take no immediate regulatory action after a hot air balloon crash in Texas killed 16 people on July 30, 2016.

If you have been hurt in any type of aircraft accident, or you have lost someone you love in an aviation crash, speak to a New York City airline accident lawyer as soon as possible.

Just two months after the tragic Texas hot air balloon crash, the FAA has announced it will not adopt any new regulatory measure for the hot air balloon industry—at least not right now.

The announcement is a disappointment to Texas Congressman Lloyd Doggett, who asked the agency to reconsider its stance on hot air balloon regulations. Previously, the FAA has refused to adopt more stringent rules for hot air balloons, despite specific requests from the National Transportation Safety Board (NTSB).

As reported by the Los Angeles Times, the NTSB warned the FAA in a 2014 letter that “the potential for a high number of fatalities in a single air tour balloon accident is of particular concern if air tour balloon operators continue to conduct operations under less stringent regulations and oversight.”

However, the 2014 letter did not persuade the FAA to change its rules for the hot air balloon industry. Now, after the worst hot air balloon accident in U.S. history, the FAA says it will not consider additional regulations until the NTSB has completed its investigation of the Texas crash.

Doggett said he pushed the FAA to adopt tighter regulations now and consider more after the close of the investigation, as the NTSB could take up to 16 months to issue its report.

In the meantime, the regulations for hot air balloons remain unchanged. The NTSB has stated it will focus its investigation on three factors: human, machine, and environment. Unlike airplanes, hot air balloons do not follow a flight plan, as hot air balloon pilots do not actually “steer” the balloon. Instead, the balloon’s route is determined by weather conditions, including wind.

If you have been injured in an accident involving an airplane, glider, or any other type of airborne craft, or you have lost a loved one in an aviation accident, it’s important to speak to an experienced airline accident lawyer as soon as possible. Call New York City aviation accident lawyer, Jonathan C. Reiter, to get a free case evaluation today. You can reach us through our online contact form, or by calling 212-736-0979.