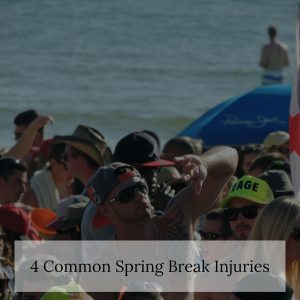 As the last few weeks of cold weather wrap up, many teens and college students are gearing up for a spring vacation. Although spring break can provide a much-needed respite from studying and other responsibilities, it can also lead to serious injuries, as well as complicated legal matters if you’re injured far away from home.

Here are four spring break injuries to keep in mind, along with tips for avoiding them.

New York City personal injury lawyer Jonathan C. Reiter states, “Excessive alcohol consumption can seriously alter a person’s judgment, causing them to engage in activities that endanger themselves and others. When you’re away from home or in an unfamiliar country or tourist spot, it’s best to avoid any substance that interferes with your ability to make good decisions.”

If you have been injured on spring break or vacation, you may be facing a personal injury case that is more complicated than an injury case involving an accident in your home state. Contact a New York City personal injury lawyer right away to protect your rights and discuss the next steps in your case.