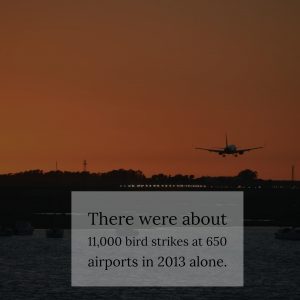 Bird strikes are a significant hazard for commercial aircraft. According to the Federal Aviation Administration (FAA), there were about 11,000 bird strikes at 650 airports in 2013 alone. When birds fly into an airplane’s path, they can break windows, cause damage to the plane, and even disable the plane’s engines.

This is exactly what happened on US Airways Flight 1549, which crash-landed in the Hudson River in 2009. Seagulls flew into both engines, forcing the plane’s pilot to make what has been called a miraculous landing on the Hudson River.

Since then, almost 70,000 birds have been killed in an effort to reduce the risk of bird strikes. The killings have upset bird lovers, who have stated they wish the airports could think of an alternative to outright killing the birds. The types of birds killed include seagulls, starlings, brown-headed cowbirds, mourning doves, and Canada geese.

Despite Reduction in Bird Numbers, Strikes Have Increased

Although airports in the region have tried to lower the numbers of birds around their aircrafts’ routes, airport officials say bird strikes have actually gone up since 2009.

Officials at Kennedy Airport also reported an increase in bird strikes after 2009.

Bird strikes go all the way back to the earliest days of aviation. In 1905, one of the Wright brothers struck a bird in an Ohio cornfield.

In 1960, birds struck a commercial flight at Boston Logan airport, destroying the aircraft. The accident caused 62 deaths and nine injuries.

According to one report, the Canada goose population, which is non-migratory, has increased fourfold from 1 million birds in 1990 to more than 3.5 million in 2013.

New York City aviation accident lawyer Jonathan C. Reiter explains, “In addition to a growing bird population, the FAA says there are more commercial flights. There were 28 million flights in 2007, and the FAA is estimated that number will go up to 36 million by 2020. Birds are a safety threat to these flights, which means airports across the country and the world are constantly searching for ways to help aircraft avoid potentially deadly bird strikes.”