Some researchers have speculated that driving drowsy is just as dangerous as driving drunk. 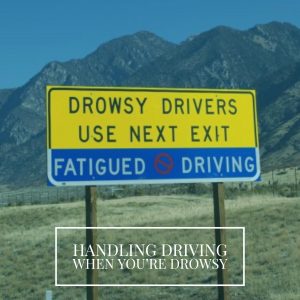 If you’re like one-third of the population, you don’t get enough sleep at night. According to the Centers for Disease Control and Prevention (CDC), one in three American adults is sleep-deprived. The National Sleep Foundation says that the average adult under age 65 should get between seven and nine hours of sleep per night.

Besides making people irritable and less productive, tiredness can also pose a danger behind the wheel. Drowsiness can also cause serious and fatal car accidents. A study from the AAA Foundation for Traffic Safety reveals that drowsy driving is a factor in 17 percent of all fatal traffic accidents. Some researchers have even speculated that driving drowsy is just as dangerous as driving drunk.

Fans of the Discovery Channel show MythBusters know that the show’s team of engineers and researchers often put common claims to the test to see if there is any scientific proof to back them up. In one episode, the MythBusters team decided to conduct experiments to determine if sleep-deprivation on the road is just as bad as driving intoxicated.

The results? According to the MythBusters, driving after 30 consecutive hours without sleep causes impairment at a level 10 times worse than driving after consuming two shots of alcohol.

During the experiment, the test subjects mimicked typical city road conditions, including snaking turns, parallel parking, and stoplights. They also drove a course with a more rural route that tended to mimic more monotonous road conditions.

In both cases, driving without sleep cause the two drivers to veer out of their lanes and make serious mistakes.

Drowsy driving has become such a concern that the National Sleep Foundation has launched a “Drive Alert, Arrive Alive” campaign to promote awareness about the dangers of getting behind the wheel on too little sleep. Tips to avoid an accident include:

Drowsy driving has caused catastrophic accidents in recent years, including major highway pileups, train accidents, and bus crashes. If you or a loved one has been injured in an accident caused by a drowsy driver, you may be entitled to compensation. Call New York City auto accident lawyer c to discuss your case. You can reach us through our online contact form or by calling 212-736-0979.