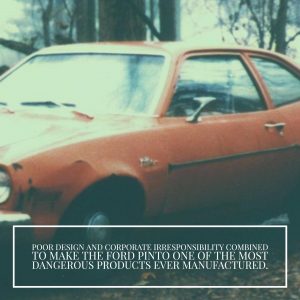 Most people rely on dozens of consumer products every day to make their lives easier and more enjoyable. From the toothpaste you use in the morning to the smartphone in your pocket, you probably touch and handle consumer products more often than you realize.

Despite federal laws that require manufactures to follow strict rules regarding the testing and safety of their products, unsafe and deadly products are sold in stores all the time. The Consumer Product Safety Commission (CPSC) and other government agencies issue recalls when dangerous products hurt people.

Here are five of the most dangerous consumer items ever sold in this country—some of them quite recently.

Tylenol is a popular over-the-counter pain reliever that is marketed for use in both adults and children. It’s a go-to medication for pediatricians because it’s generally regarded as safe for all ages, including infants. However, Tylenol was the subject of one of the largest recalls in American history after seven people died in the Chicago area in a single week in 1982.

Investigators determined that some Tylenol bottles contained capsules laced with cyanide, which is deadly to humans. Now known as the “Tylenol murders,” the case remains a cold case, as investigators never discovered who tampered with the bottles. After the deaths, Tylenol pioneered tamper-resistant packaging. Congress also passed guidelines in 1989 requiring all drug manufacturers to use tamper-proof packaging.

Lawn darts—also known as Jarts—were pulled from store shelves due to one grieving father’s crusade in memory of his young daughter. She died after suffering a brain injury caused by a lawn dart striking her skull. The father’s investigation revealed that the CPSC had struck a deal with the manufacturer of lawn darts: The company could sell them if it added a warning label telling consumers they were for adults only.

A closer look at lawn dart injuries showed that Jarts injured 6,000 people in just eight years, with children accounting for 81 percent of all victims. The CPSC eventually banned all lawn darts in 1988.

Poor design and corporate irresponsibility combined to make the Ford Pinto one of the most dangerous products ever manufactured. The number of deaths caused by the Pinto’s rear-mounted fuel tank ranges from 27 to 180. After accidents and fires started happening—even in low-speed crashes—Ford admitted it knew about the Pinto’s design flaw but failed to make adjustments because adding additional safety components would have cost the company an extra $11 per car.

Many speculated that tire manufacturer Firestone could never spring back from the delamination issue that hounded the company in the early 2000s. Firestone was forced to recall over 6.5 million tires after 175 people were killed and 700 were hurt in accidents caused by defective tires.