If you or a loved one has been injured by a defective airbag call the New York mass transportation accident lawyer Jonathan C. Reiter for a free case evaluation 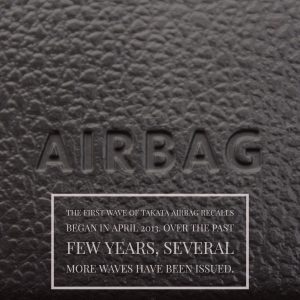 If you drive in the U.S. today, you can’t afford to get behind the wheel of any vehicle without knowing about the Takata airbag recall. By far the largest auto recall in American history, the recall encompasses 40 million vehicles in the U.S. and more than 100 million worldwide. In the United States, it spans 14 automakers and includes both domestic and foreign cars and trucks. The recall also applies to both driver-side and passenger-side airbags.

The National Highway Traffic Safety Administration (NHTSA) has called it the “most complex” auto recall ever. No matter what kind of car you drive, it’s important to make sure your vehicle is safe. If you have a defective Takata airbag, you can get it replaced at no charge. Taking action could save your life or the life of a loved one.

Why Are the Takata Airbags Defective?

The first wave of Takata airbag recalls began in April 2013. Over the past few years, several more waves have been issued.

The problem with the airbags, which were installed in cars manufactured between 2002 and 2015, is the metal cartridge that holds the airbag’s propellant wafers and acts as the airbag’s inflater. In some crashes, these defective inflaters explode, sending metal shrapnel and other debris flying through the vehicle at high speeds. The faulty inflaters also sometimes cause the airbag to inflate improperly, rendering it ineffective in a crash. As of July 2016, there have been 10 confirmed deaths and over 100 injuries caused by Takata airbags.

Multiple sources say Takata knew about the defective airbags all the way back in 2004, but failed to take any action and neglected to notify the NHTSA that it’s faulty airbags were linked to fatal accidents and injuries. Another report says Takata allowed a defect rate six to eight times higher than the acceptable rate. To put this into perspective, Takata allowed 60 to 80 defective airbags per 1 million to leave its factory.

How Many Defective Airbags Have Been Repaired?

According to the NHTSA, more than 10 million defective Takata airbags have been repaired as of August 12, 2016, including over 5 million driver-side airbags and more than 4 million passenger-side airbags. The NHTSA also says that Honda Acuras manufactured between 2001 and 2003 have a high risk of ruptures.

The Takata airbag recall continues to grow, so it’s important to continue checking to see if your vehicle has been recalled. To find out if your car is on the recall list, go to safercar.gov and enter your vehicle’s VIN number. The safercar.gov website covers all recalls issued within the last 15 years.

Recalls of this magnitude are fortunately rare. When they occur, however, they are a sobering reminder that, no matter how many safety checks we put on auto manufacturers, defective vehicles and vehicle components can still enter the stream of commerce.

If you or a loved one has been injured in a motor vehicle collision, or you have lost a loved one in a crash caused by a defective vehicle or part, call New York mass transportation accident lawyer Jonathan C. Reiter for a free case evaluation. 646-863-8172.