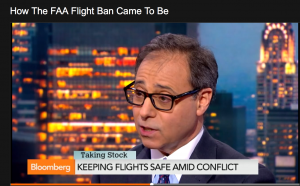 How The FAA Flight Ban Came To Be .

NEW YORK, July 25, 2014 /PRNewswire/ — New York based aviation accident lawyer Jonathan C. Reiter offered his legal perspective on the FAA’s decision to expand a ban on flights in conflict zones during a recent interview with Bloomberg. The decision was made by the agency after a projectile from Gaza landed near a major airport in Tel Aviv.

U.S. carriers including United and Delta Airlines have cancelled flights to the country, and some international carriers are reportedly now following suit. According to Jonathan C. Reiter, of the Jonathan C. Reiter Law Firm, PLLC, this move is critical for airlines for protecting flight passengers in zones where there is political violence or other forms of ongoing conflict.

The Duty of Airlines and the FAA

When asked what the liabilities are in cases where something goes wrong, and a commercial airline crash occurs over territories where there is major conflict, the lawyer further asserts, “If things go wrong, then we’re dealing with a failure mode.”

Recently, a universal no-fly area was declared over eastern Ukraine after a Malaysia Airlines jet was shot down. This has impacted the industry as a whole according to attorney Jonathan C. Reiter, who says the “situation of shooting down the plane over Ukraine has created such an atmosphere of terror worldwide about the aviation industry that I think it has influenced the situation. I think many people feel that way.”

Attorney Jonathan C. Reiter also expressed in the interview his view on airline liability in cases such as the one involving the Malaysia Airlines plane. The attorney says in these cases airlines are responsible to victims. In reference to the airline involved, he assesses, “They are going to have to compensate the victims to the extent of at least what are called the special drawing rights…that doesn’t prevent the passengers from suing for more if they prove negligence by the airline.”